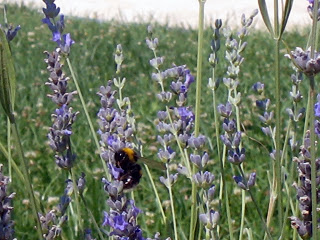 Giovanni has been rubbing oil on my back and now begins making his way down each leg, whispering, “belli piedi . . . cara mia”––something about giving me a foot massage, I think. I drowsily nod and smile, assured by his tone that I will enjoy whatever he is proposing. The sun is warm on my face and closing my eyes, I hear the gentle lapping of the pool water and bees droning softly nearby in the fragrant lavender and the freshly cut grasses. . .

Suddenly, I sense a dark shadow passing across me and I bolt upright with a start, my book crashing to the ground as I whip my head back and forth to see Who?!——What?!  Still disoriented, I realize I’m topless and hurriedly pull my towel up around me. Within the same fraction of a second, I realize it doesn’t matter. I’m completely alone.

I feel I’ve woken in some other world, so vastly different are my surroundings from earlier. Ominous black clouds are overtaking the sky—moving so swiftly it is unreal—like the time-lapsed storm footage they show on the weather channel. I am frozen in awe for a moment, then spring to action, simultaneously scooping up my belongings as I slide into my sandals.

Quickly scanning the surrounding countryside I find no evidence of life—not a soul in sight as I make my way up the steep path from the pool where my tiny rental car is waiting for me…as comforting as seeing an old friend in this moment.

I’m just two steps away when the winds hit ground and the first raindrops make their descent. I rush to open the door and throw my bag inside with me right behind it.—Grateful for the protection from the storm, I silently reassure myself I’m safe and everything is fine but I’m not convinced that’s entirely true.

The drive along the narrow winding road up the hill to the medieval village where I’m staying takes just a few minutes, but the foreboding clouds seems to be racing me there and by the time I reach the outer walls, I see the storm has enveloped everything—afternoon now seems midnight and the lightning and thunder are clashing so remarkably close together, I wonder if it is even wise to get out of the car.

I still haven’t seen a single person. The usually thriving cafes are deserted—no sign of the chivalrous characters who have offered to open the driveway gates for me on days prior.

I pull up the brake and simultaneously reach for the door handle, shielding myself with one arm, as I exit the car.  I can barely see with my hair whipping across my face, but thankfully, the old latch doesn’t give me any trouble.  I push the iron gates open wide and drop the rods into the ground to hold them in place. Back in the car, I slip into gear and zip into the garden parking area, skidding to an undignified stop in the loose gravel.

I pause for a beat, girding up for a mad dash back to (dutifully) close the gates. My belongings gathered in one hand, I open the door and make a run for it. Halfway there, a duo of thunder and lightning strike simultaneously. Yelping like a frightened puppy, I am sent leaping up in the air and running in the opposite direction. “Forget the ****** gates!”

I hear a crackle and sizzling sound nearby as I bound up the front steps of Il Cassero and slam the entry doors behind me. Relief. Then dread. I’m unable to see two inches in front of my face.  The electricity has been knocked out.

I stand there, my back against the entry doors willing my eyes to adjust more quickly, my mind racing. Should I turn right and brave the darkness up the three long flights to my apartment?—or pound on the solid timber door to my left, yelling for my hosts, Luigi and Antonella to come to my aid?  I am strongly leaning towards the latter, but still trying to curtail my mounting panic for fear of embarrassing myself.

I listen intently, hoping I’ll hear someone inside but it’s as quiet as a tomb. Should I go back outside? Even that seems a better option than standing here facing the black abyss of a stairway leading down below me.

On my initial tour of the property, Luigi had motioned down towards the stairs telling me that during the war, his family home “Il Cassero” was occupied by German soldiers. The cave (kah-veh, as Luigi pronounces it) has tunnels leading from it to the nearby watch tower (“Il Torre”) and beyond, leading out of the city.

If I understood Luigi’s broken English correctly, the caves had been used for holding prisoners and several skulls were found deep in the tunnels. He said that although the German soldiers were the most recent to make use of these facilities, the tower and its tunnels have been host to many other unsavory activities over the last several hundred years.

While I was politely listening and reacting as etiquette calls one to do, I was thinking I really could have done without these historical details on my first solo/sleeping–all–alone–in–an–ancient–castle vacation.

Luigi also told me that his father had some of the passageways blocked after the family dog headed in one day and never came out. Somehow, that part struck me the most. I could just see the little guy heading off to investigate with his tail a–wagging. I consoled myself with the notion that he had found the exit at the edge of town and had elected to stay with a nice family who took him in. (They have a lovely farm.)

My heart was pounding in my ears. I had succeeded in spooking myself. Was that someone standing on the landing down there?!

My fist was poised at Luigi’s door when the lights flickered on. With a last glance down (just to make sure someone or something wasn’t preparing to bound up after me), I sprinted up the ancient stone steps, taking two and even three at a time (quite the feat) and then quickly made my way down the twists and turns of the windowless and dimly lit corridor, half expecting to feel a hand at my back at any moment.

Mine was the last apartment of the restored and occupied portion on this level. Just beyond was an unlit area where old furniture was stored and beyond that, a bolted door leading to parts unknown. The shadowy forms there looked eerier than ever under these circumstances and I didn’t take my eyes off them as I approached my door.

As if on cue, the very moment my key made contact with the lock the wall sconces flickered and went off—once again I was plunged into a blinding darkness.

Gasping, I frantically turned the latch and pushed inside, closing and locking it behind me in one swift, deft motion. Without pausing, I rushed to open the kitchen window shutters, stumbling over the table and chairs on my way.

The frequent lightning bursts allowed me to see, albeit intermittently, as I fumbled through cupboards and drawers to find candles and matches.

One by one, I lit the tapers and tea lights and made my way through the apartment, placing them strategically around each room until I deemed the dark corners to be sufficiently exposed. (No one behind the shower curtain? Check. No one under the bed or in the armoire? Check and check.)

Shivering now, I pulled a blanket around my shoulders and curled up in a chair to watch the storm out my bedroom window. Ensconced in my cozy apartment, I felt quite secure and could finally relax a bit. These thick stone walls had no doubt seen many a storm and seemed unperturbed by all the goings on out there.

Now that I was safe and sound inside, the heart–pounding moments prior seemed more like an enjoyable little adventure.

“A reprieve from all the days of sun, really.” I said half aloud to myself. True, it would be nice to have a “Giovanni” here in the candlelight with me, I mused, but aside from that, I felt a certain exhilaration and sense of accomplishment for braving this alone.

“Braving!” I scoffed at myself, chuckling and shaking my head as I replayed the few minutes prior. How foolish I must have looked darting about the old castle, glancing furtively behind me and bounding up the stairs like my life depended on it!

Turning back to my room, I watched the flames flicker and the shadows of branches crisscross the bed and walls as the trees battled to hold their own in the storm.

I silently blessed my good fortune for having stocked up on candles when I initially set-up house. Truth be told, I purchased them with the idea of creating ambiance over dinner, not for any sort of practical purpose like this.